A research project on transboundary content, collaboration and aesthetics in cinematic storytelling.

With dark humor, brutal honesty and creativity for fuel

they reconcile themselves with life’s relentless forces. 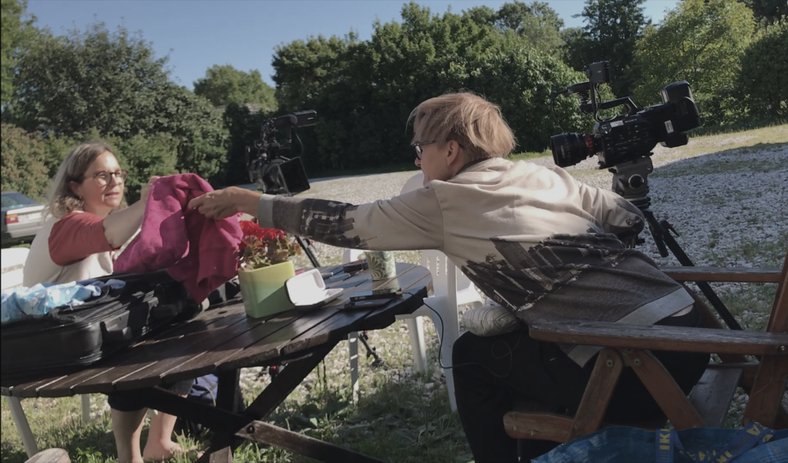 Two filmmakers (50+) – long time friends & survivors of violent health care encounters – meet up for coffee. Kersti is frustrated to the point of quitting film. Annika arrives with an idea; an empty soccer field with a bled-out woman in a hospital bed. They decide to challenge cinematic storytelling with one more film – of untold bloody trails through women’s lives. A film about being a human with heart, brains & uterus.

As the filmmakers draw up a manifesto for their film, write the script and struggle to shoot and edit, they talk about politics, sex, alienation, parenthood, blind spots, criticism etc. With sincerity and humor, they deal with the painful experiences that form the basis for the kaleidoscopic and absurd film within the film.

When Annika is diagnosed with aggressive cancer of the womb, what started as a playful attempt to get back to the joy of creating, becomes a story of life and death.

A story of BLOD.

"We talked about our many experiences of hospitalization – near death, uterus in focus. How foreign our bodies became to us and how alien we were in and to the hospital environment. Monitored pawns in a game we were at the center of while completely powerless. Where were the artistic expressions that conveyed these experiences? And how could they be described without exploitation or repelling chock. Questions that became even more acute when one of us got uterine cancer.”

The film revolves around female bleeding from cradle to grave as well as emotional swells in the wake of the blood – between people when bodies fail. The film events where modes of creating, key issues and artistic ambition are embodied, are based on our shared experiences of being human with brains, heart and uterus.

Our starting point for the film project is to seriously transform the shadows of our losses into artistic expression.

We want to find ways to tell stories about physical experiences shared by half the population of the world – abortions, miscarriages, pregnancies and menopause. States of life and death in intensely intimate disgusting detail which are not often given space in filmmaking. Experiences of vulnerability thar are also deeply human. 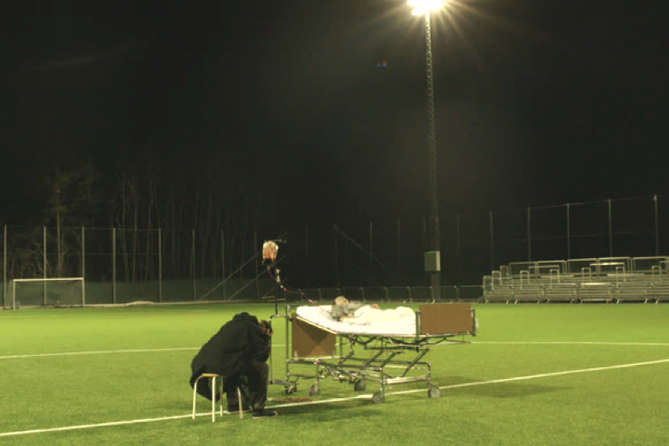 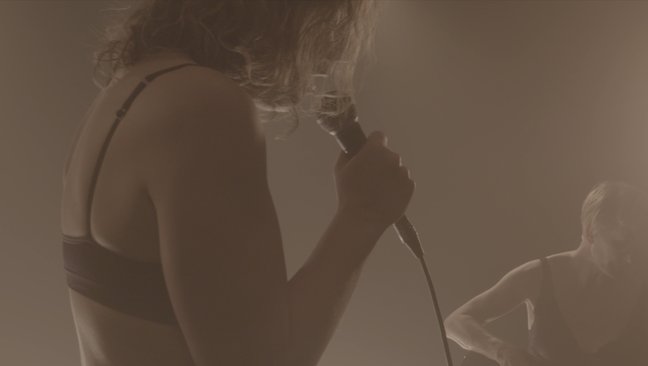 One of the author Moa Martinson’s male colleagues said of her writing ”it is so private, it’s almost gynaecological”. Sixty years later the intimate life of women still feels a bit embarrassing. But not for Annika Boholm and Kersti Grunditz Brennan! They tackle the topic of female blood with audacity. Two women in their 50s with life experience and solidly professional qualifications throw caution to the wind and grapple with matters which are part of life for fifty percent of the world’s population but seldom spoken about.

As dancers and choreographers they have used their bodies like instruments. The heightened awareness of bodily functions colours their story of illness and ageing. Therapy sessions with dolls, musical episodes and the substitution of locations such as sports arenas for hospitals creates new vistas where gravity, pain and humour meet.

The film makers Annika & Kersti make a revenge movie about bloody trails through womanhood. When the bizarre bleeding of one of them turns out to be cancer, they find them selfves at the center of their movie.

What started as a playful attempt to get back to the joy of creating, becomes a story of life and death. Propelled by wild conversations broken up by scenes from the movie they are making.